Rosalind Janssen is known to be a bit of an expert on Deir el-Medina (the ancient name ‘Set Maat’ – translates as ‘The Place of Truth’) and this was a talk with a difference. 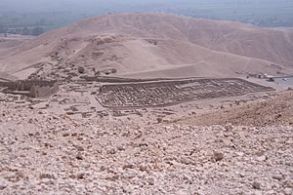 Deir el-Medina was the workers village; home for those who worked on and in the tombs of the Valley of the Kings during the 18th to 20th dynasties of the New Kingdom.
It is a very important site and much work and research has been carried out there.  I remember visiting it when I lived in Egypt and found it quite fascinating – visualising the lives of those who lived there so long ago.

Rosalind brought a new slant with her talk;  looking into the records, revealing the drunken and disorderly behaviour of some of the inhabitants – the young men of the village.

As is the norm with the ancient Egyptians, detailed records were made and kept of the various events, and thanks to their careful record keeping, here we were, all these many centuries later, listening to the litany of wrong-doings – fabulous!

It was amusing, entertaining and most enjoyable.  It is always good when a speaker takes us away from the usual approach and into a new realm, so thank you Rosalind!